Repair and restoration of the Red-Brick Building

Central Government Office Complex No.6-A, which houses the Ministry of Justice, is one of the biggest constructions of Japanese administrative offices of its scale, consisting of 21 floors and 4 basement floors. The building is functionally divided into two zones: “The Ministry of Justice zone” on the north side and “The Public Prosecutors Offices zone” on the south side. In the entrance hall of each zone, there is a beautiful picture adorning the wall, the original of which was drawn by the artist Ikuo Hirayama. The outer wall of the building is covered with dignified reddish granite from Canada in enchanting harmony with the red-brick wall.

While the building was completed on June 30, 1990 as the new Ministry of Justice building, a study was made on the preservation and restoration of the Old Ministry of Justice building (the present red-brick building of Central Government Office Complex No.6) and it led to the conclusion that “as the sole historical building which has survived from among the central government buildings of the Central Government Buildings Integration Project drawn up in the Meiji era, the retention of the building is essential to preserve the appearance of the Kasumigaseki district”. Following that conclusion, it was decided to preserve and utilize the old building, and to restore the external appearance to that of the original building.

The original idea of the Integration Project in the Meiji period was brought to Japan by the German architect W.

Bo¨ckmann. His blueprint for the building is displayed on the stone floor in the sunken plaza located between Complex No.6-A and the red-brick building to commemorate his achievements.

The original red-brick building, designed by the two German architects W. Bo¨ckmann and H. Ende, was completed in December 1895 (28th year of Meiji) after about seven years of construction to serve as the Ministry of Justice building. The roofs and floors of the building were destroyed by fire during the war, but the red-brick wall remained intact. When the structure was renovated through restoration work conducted from 1948 (23rd year of Showa) to 1950 (25th year of Showa), there were some alterations in the materials and the shape of the roof. The present red-brick building has, however, been restored completely to its original appearance of 1895 (28th year of Meiji) when it was built for the first time, and its external appearance was designated among the Important Cultural Properties of Japan on December 27, 1994. 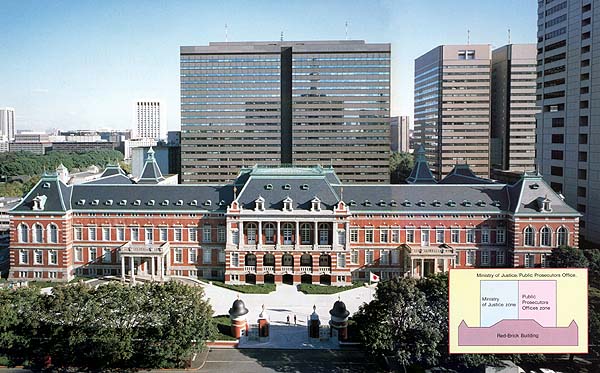