Eﬀorts to Secure Safety and Security

The Strategy to Make "Japan the Safest Country in the World"

In the past, Japan boasted its well-maintained public peace, but in 2002, the number of general penal code offenses that were identified by the authorities increased up to about 2,850,000 cases, the worst number in postwar history. Meanwhile, the clearance rate dropped drastically and remained at a very low level, which made the deterioration of public safety an issue of grave concern to the nation.
Under such circumstances, the Government established the Ministerial Meeting Concerning Measures Against Crime in 2003, which formulated in 2003 and 2008 “The Action Plan for the Realization of a Society Resistant to Crime”; the Government has actively been promoting comprehensive measures for making the whole society resistant to crimes by taking countermeasures against crimes and by improving the social environment in which criminal activities are difficult to occur.
As a result of such measures, some improvements were made in that the number of general penal code offenses that were identified by the authorities decreased by more than half compared to the worst level after World War II. The public opinion poll conducted in July 2012 by the Cabinet Office, however, revealed that the concerns about public safety were still high. In addition, in view of new threats such as cybercrimes and international terrorism, as well as the Tokyo 2020 Olympic and Paralympic Games, it is necessary to further reduce crimes, and at the same time, to strain to foster the sense of trust among the people about public safety. For this reason, in December 2013, “The Strategy to Make ‘Japan the Safest Country in the World’” compiled at the Ministerial Meeting Concerning Measures Against Crime, was approved in a Cabinet meeting.
Based on this strategy, the Ministry of Justice is taking measures for the prevention of re-offending (see pages 13 to 14) and making various efforts such as those described below.

Given the current situation of cybercrimes, other crimes associated with the advancement of information processing, and crimes obstructing compulsory execution, The Bill for Partial Amendments to the Penal Code and Other Related Laws was submitted to the ordinary Diet session in 2011; its purpose was to ensure appropriate responses to these crimes and to cope with the advancement of information processing. The most part of the penal provisions of the Code was enforced on July 14 of the same year, and those for procedures were enforced on June 22, 2012.

Cooperation Between the Investigative Authorities of Foreign Countries and Japan

Measures at the Border 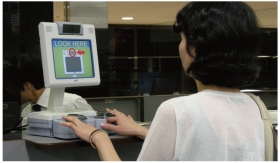 Immigration examinations using personal identification information
In order to protect people’s lives and safety, it is highly important to prevent those who intend to enter Japan for illicit purposes, such as terrorists and criminals who disguise themselves as tourists, from entering the country at the border. To ensure that such illegal entrants are identified, the Immigration Bureau conducts strict and effective immigration examinations through the methods described below.

Based on such information, the bureau is striving to prevent the entry of terrorists or those who intend to illegally enter the country with forged or altered passports hiding their records of deportation.

The bureau is striving to identify terrorists etc. by obtaining passenger information in advance regarding aircrafts and vessels entering Japan and closely checking them against the terrorist blacklist. 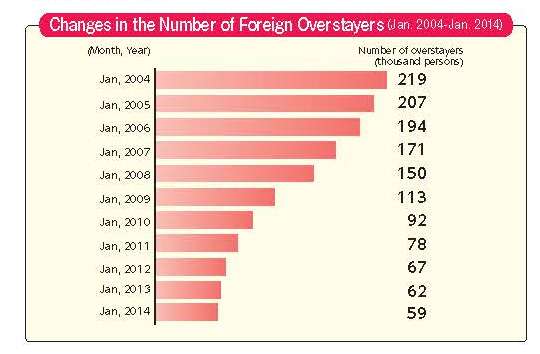 Changes in the Number of Foreign Overstayers (Jan. 2004-Jan. 2014)
Along with measures at the border, it is also important to reduce the number of foreigners who are now residing illegally in Japan for the restoration of security. The Immigration Bureau is striving to reduce the number of illegal foreign residents by reinforcing the detection of illegal residents, performing safe and reliable forced repatriation, and implementing public relations activities for prevention of illegal employment.
In addition, the existence of fraudulent foreign residents, who work illegally disguising themselves as legal residents, has recently become a problem; they falsify their identities as well as  the purpose of their activities and obtain residence permission by using falsified or altered documents. Thus, the bureau will promote the analysis of information on foreign residents whose information can be obtained from the new residence management system introduced in July 2012. Through the analysis the bureau will endeavor to build a society where there is no illegal foreign resident--made possible by assembling pictures about foreign residents and by taking active measures against fraudulent foreign residents by accurately performing procedures to revoke their status of residence.

Even though the overall number of inmates falls below the capacity, female penal institutions are still overcrowded. Also, many inmates who require great time and effort for treatment compared to general inmates, such as elderly inmates, are imprisoned. As a result, the workload of the personnel is increasing.
Under such circumstances, efforts are being made to renovate old facilities, and at the same time, the security systems are being improved and reinforced, so that escapes and other incidents can never occur. In addition, efforts are being made to further improve the capabilities of the personnel for the execution of duties so that they are able to respond to different types of inmates. In order to create a new option for transfer of sentenced foreign persons to the personnel, the processes have been advanced toward the conclusion of bilateral treaties on the transfer of sentenced persons with Brazil, Iran, and other countries.

Considering that there are many probationers/parolees who have difficulty in returning to society due to their old age and unemployment, it is very important to make efforts to help them with their rehabilitation and to prevent them from repeating offenses. For this reason, a framework to offer guidance and support in the society is being reinforced in cooperation with regional organizations and groups. The measures provide necessary assistance on securing advisers and bases for human life including housing and occupation.

In view of the Tokyo 2020 Olympic and Paralympic Games, creating a terrorism-resistant society is required. In the light of the prevention of terrorism, among others, the Public Security Intelligence Agency further intensifies cooperation with domestic and foreign agencies concerned, and at the same time, endeavors to collect and analyze intelligence to find out the presence of any individuals, bodies, or organizations suspected of involvement in terrorism as well as to reveal their moves.
The Public Security Intelligence Agency also makes every endeavor to collect and analyze relevant intelligence on the issues of abducted Japanese nationals and nuclear/missile developments conducted by North Korea, as well as of the proliferation of weapons of mass destruction and other activities detrimental to Japan.
As to Aum Shinrikyo, the group has split into two groups because of differences in how they perceive the intention of Shoko Asahara, also known as Chizuo Matsumoto, and in action policies to realize the goal of each group; the mainstream group goes by the name of "Aleph" and the group by Fuminiro Joyu goes by the name of "Hikarinowa" both of which have been active. These days, the groups have expanded activities by vigorously attracting a large number of new followers. The on-site inspections on the mainstream group have revealed that photos of public security intelligence officers are skewered with knife-like objects and placed near the altar. Even after 20 years since the subway sarin gas attack, the cult still retains its dangerous and antisocial nature, expanding its influence. The Public Security Intelligence Agency is fairly and strictly implementing surveillance and shedding light on their activities in an effort to secure public security and to ease the feelings of fears and anxiety of concerned local residents.
The Public Security Intelligence Agency publishes the “Review and Prospects of Internal and External Situations” which compiles the domestic and international situations, and the “Summary of International Terrorism” which compiles the movement of international terrorism every year. You can see both documents (for the “Summary of International Terrorism,” the document on the website is an edited version) on the Public Security Intelligence Agency website (https://www.moj.go.jp/psia/). "Review and Prospects of Internal and External Situations"