Re-Offending Prevention ～Establishing the Safest Country in the World ～

Q: What kind of issues to be addressed in order to build the safest country in the world?

Ensuring favorable public security is not only prerequisite for the success of the Tokyo 2020 Olympic and Paralympic Games, but also an important basis to enable women and the young to flourish at ease in the community. It is also an important issue that could be the “foundation” of the construction of the locality.
At the Ministerial Meeting Concerning Measures Against Crime in December 2013, the “Strategy to Make ‘Japan the Safest Country in the World’” was approved, and while efforts for comprehensive crime control were made by the government as a whole based on the strategy, the number of crimes recognized decreased, therefore, improvement can be seen in the public security of Japan.
However, while survey results show that about 60 percent of crimes are conducted by about 30 percent of repeated offenders, the rate of offenders returning to prison has been increasing since 2004, and the rate has become about 60 percent in 2013. Taking the above facts in consideration, the question of how we would prevent the repetition of crimes and delinquencies (= the prevention of re-offending) is a major challenge for the reduction in the number of crimes as well as for the construction of a society where people can live safely in peace. 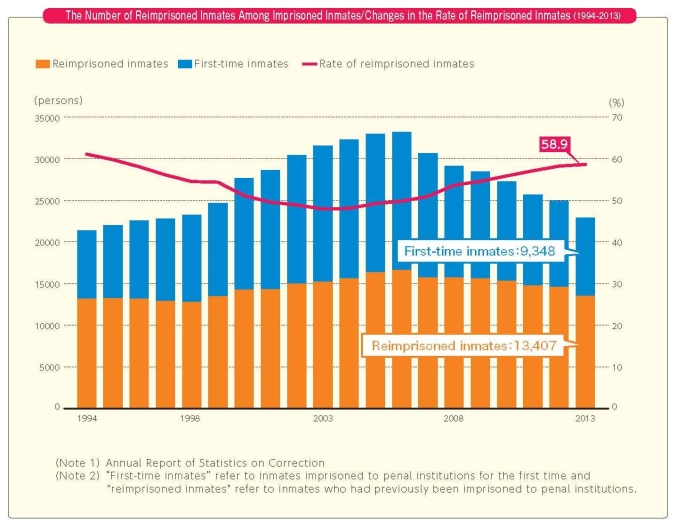