Why Crimes and Delinquencies are Repeated 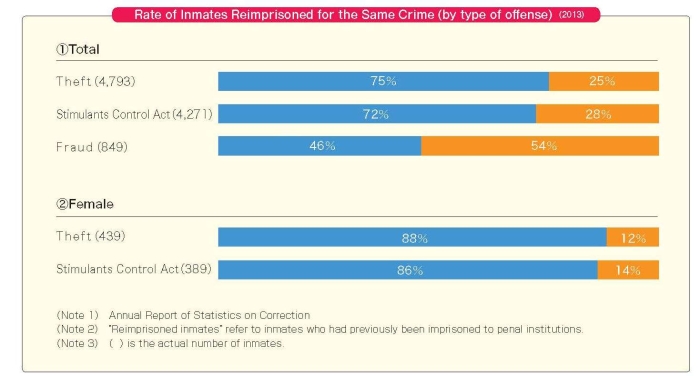 ●Then why are crimes and delinquencies repeated?

Various approaches have been made from the perspectives of psychology and sociology etc. for the causes of crimes, however, those who are released from prison generally have the following problems:
1) individual problems such as drug dependency are serious
2) connections with families and local communities have become diluted resulting in isolation

As a result of these problems, they have difficulty in acquiring occupation necessary to live as independent members of the society or finding places to live with peace of mind. For example, about 70 percent of inmates who become imprisoned by re-offenses were out of work at the time of re-offending. Also, about 6,400 inmates are released rom prison every year with no place to go back, and among those, one out of three inmates go back to prison by re-offending within two years.
To hold them back from repeating crimes or delinquencies, it is necessary to provide effective guidance or approach to overcome problems of each person, or implement efforts to secure “occupation” or a “place to belong” necessary to become independent in a society.