The 28th Session of the United Nations Commission on Crime Prevention and Criminal Justice ("the CCPCJ") , the last CCPCJ session before the Kyoto Congress, was held in Vienna, Austria from May 20 to 24, 2019. 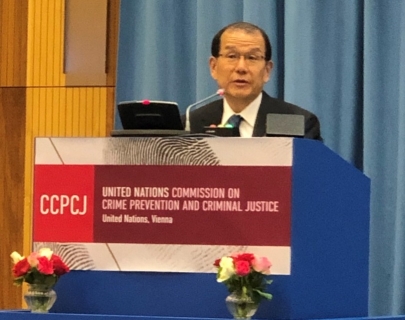 Prosecutor-General INADA delivered a statement at the plenary.

The Japanese delegation hosted side events.
The CCPCJ was established by the Economic and Social Council (ECOSOC) as one of its functional commissions. Consisting of 40 Member States elected by the ECOSOC, the CCPCJ is mandated to implement and review the United Nations crime prevention and criminal justice programme. At the 28th session of the CCPCJ, Mr. Nobuo INADA, Prosecutor-General, and other government officials from the Ministry of Justice and the Ministry of Foreign Affairs attended the meetings as members of the Japanese delegation.

On the first day of the session, Prosecutor-General INADA, as the Head of Delegation, delivered a high-level statement at the plenary meeting. Prosecutor-General INADA called on the attendees to join the Kyoto Congress in 2020 and contribute their experiences and ideas to the discussions during the Kyoto Congress. He emphasized the importance of forming partnerships with those outside of our criminal justice systems, particularly the local community and citizens, in order to build safe societies and achieve sustainable development.

In addition, the Japanese delegation hosted two side events: one was entitled "Reducing Reoffending: Public-Private Partnership and Multi-agency Coordination" on the first day, and the other was entitled "Community Support for Reintegration of Offenders including the Role of Volunteer Probation Officers" on the second day. Many criminal justice practitioners participated in our side events to discuss a variety of topics that will be addressed at the Kyoto Congress.

Moreover, the exhibition booths established by the Ministry of Justice of Japan to promote the Kyoto Congress were visited by many attendees.