Main Weekly and Monthly Events of the Ministry of Justice

Every year, one week from May 1 to 7 at “Constitution Day” on May 3, is designated “Constitution Week”. During the Week, various programs and events designed to relate to the people, the spirit of the Constitution, the functions of the justice system and other related matters are conducted on a nationwide scale. Constitution Week is conducted under the joint auspices of the Ministry of Justice, the Supreme Court and the Japan Federation of Bar Associations. 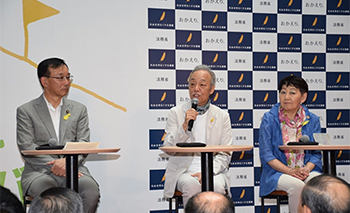 ・JAPAN LAW DAY WEEK - October 1-7
"Japan Law Day" originates from "Judical Memorial Day(Shiho-kinenbi)" which was inaugurated on October 1, 1929 to commemorate enactment of the Jury Law on October 1 of the previous year, and on June 24, 1960, the Cabinet decided to designate the 1st of October every year as “Law Day”. Every year, the week starting on October 1, Japan Law Day, is designated as “Japan Law Day” Week. During the Week, various programs such as lectures, free legal counseling services and other related programs are organized all across the country in order to promote respect for law, protection of fundamental human rights and establishment of an orderly society through the rule of law. Japan Law Day Week is conducted under the joint auspices of the Ministry of Justice, the Supreme Court and the Japan Federation of Bar Associations.

・NOTARIZATION WEEK October 1-7
Every year, one week from October 1 through 7 is designated as Notarization Week, and in order to publicize the notarial system, public information activities through the media such as newspapers and TV, the display of posters, the distribution of leaflets, the holding of lecture meetings and consultation services are extensively carried out in all parts of the country.

・Human Rights Week
The United Nations General Assembly at its 5th session in 1950 invited Member States to adopt December 10 as “Human Rights Day” to commemorate December 10, 1948, on which the Universal Declaration of Human Rights was adopted by the General Assembly at its 3rd session, and to exert increasing efforts in this field. In Japan in 1949, the year following the adoption of the Declaration, the week ending on December 10 each year was designated as “Human Rights Week” and nationwide human rights promotion activities have been carried out since then. 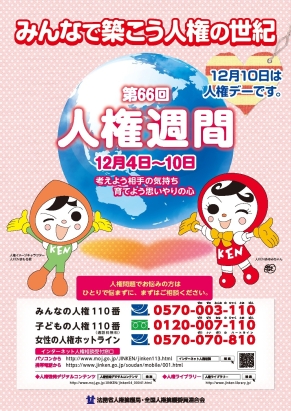