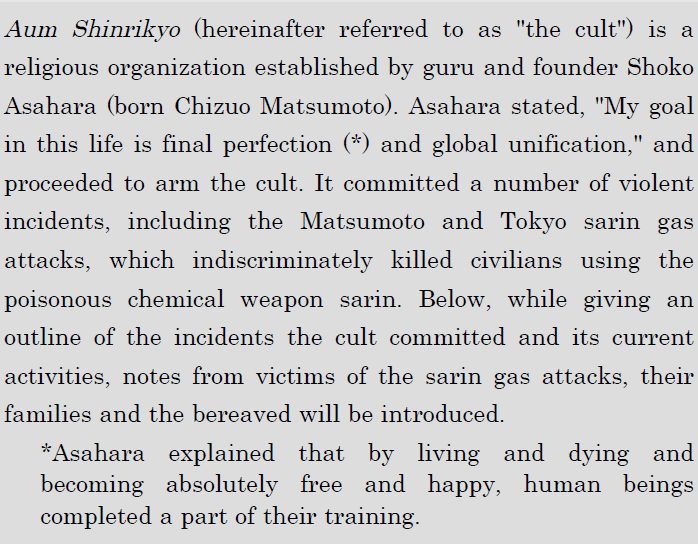 On March 20, 1995, the poisonous chemical weapon sarin was dispersed in five train cars on three subway lines that pass through Kasumigaseki Station in Tokyo during the morning rush hour. As a result, the attack caused mass casualties, killing 13 people and injuring more than 5,800 (*).
* The number of victims who received benefit payments based on the Act Relating to the Payment of Benefits for the Relief of Aum Shinrikyo Crime Victims
Details of “Tokyo Subway Sarin Gas Attacks”
Sarin was dispersed in a residential area of Matsumoto City, Nagano Prefecture on June 27, 1994, killing 8 people and injuring 140 (*).
* The number of victims is based on criminal trial records
Details of "Matsumoto Sarin Gas Attack"
In addition to the above, the cult committed a number of other violent incidents using the chemical weapon VX (a deadly nerve agent).
Details of "Other Violent Incidents"
The cult that caused the previous incidents changed its name and is still active. Among them, more than 100 new members a year are added to the group using the name "Aleph", especially among younger generations. 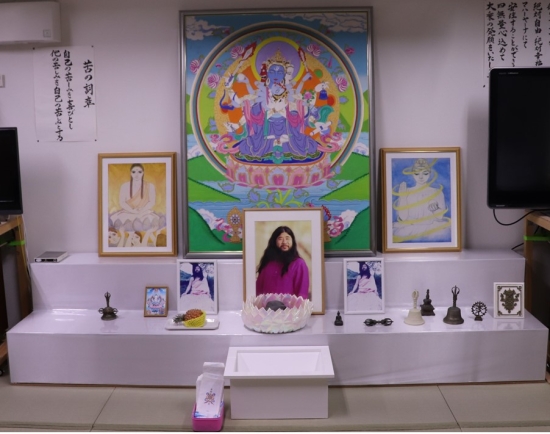 An altar that was found during the on-site inspection at Sapporo facility (Hokkaido, May 2019)
Details of “Current Status of Aum Shinrikyo”

Voices of victims, their families and the bereaved